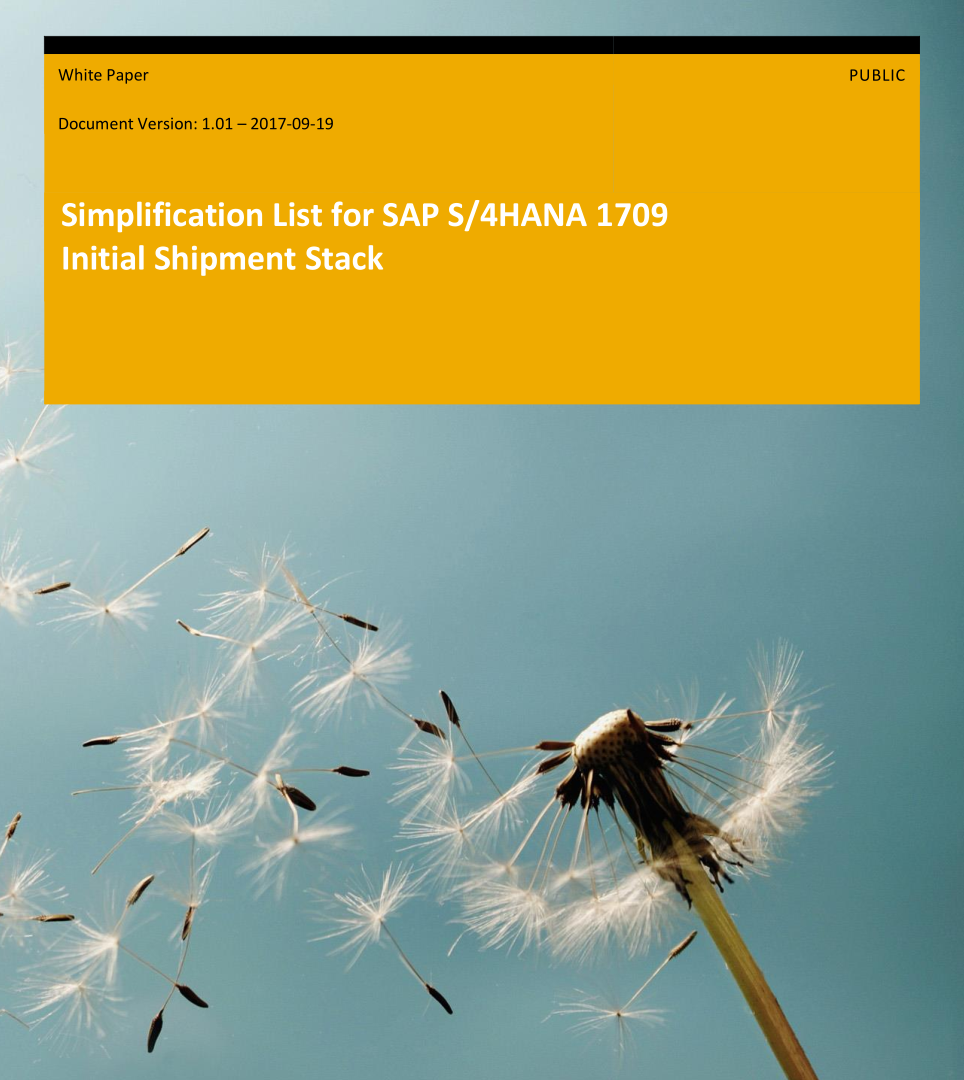 Following up on my last blog (SAP’s Customer Engagement Initiative and it’s changes on PS), I’m going to continue with the next obvious topic; what are the changes in S/4HANA for PS?

In the old days, we had to look at the release notes for each new R/3 or ECC release.  Now, SAP captures the changes for each release in a document called the Simplification List.  New name, same purpose.  The name continues SAP’s continued push to re-brand their products as being more simple, easier to work with, etc.  Of course, the current simplification list for S/4HANA 1709 (document version 1.01) is 894 pages long… draw your own conclusion.

To be focused, this blog will only cover the biggest impacts in the PS area.  I could certainly summarize the general FICO changes, investment management (IM) and fixed assets but it would end up being a 5,000 word blog.

Secondly, PS has been documented in the simplification list going back to S/4HANA 1511 but SAP hasn’t actually rolled out many changes (yet).  By that I mean that each simplification list contains similar verbiage where SAP is primarily providing guidance on what is in store for future PS releases.  I’ll have to re-read each one to compile a list of actual changes that have been delivered but thus far, the amount of changes forthcoming far exceed what has actually been released.

What is SAP communicating?

Brace yourself.  Going all the way back to the first S/4HANA release (1511), SAP says repeatedly in the document that “________ is/are still available but is/are not considered as the target architecture.”  For example, the below screenshot refers to the existing project simulation functionality (NOTE: the yellow highlighting is for my emphasis). 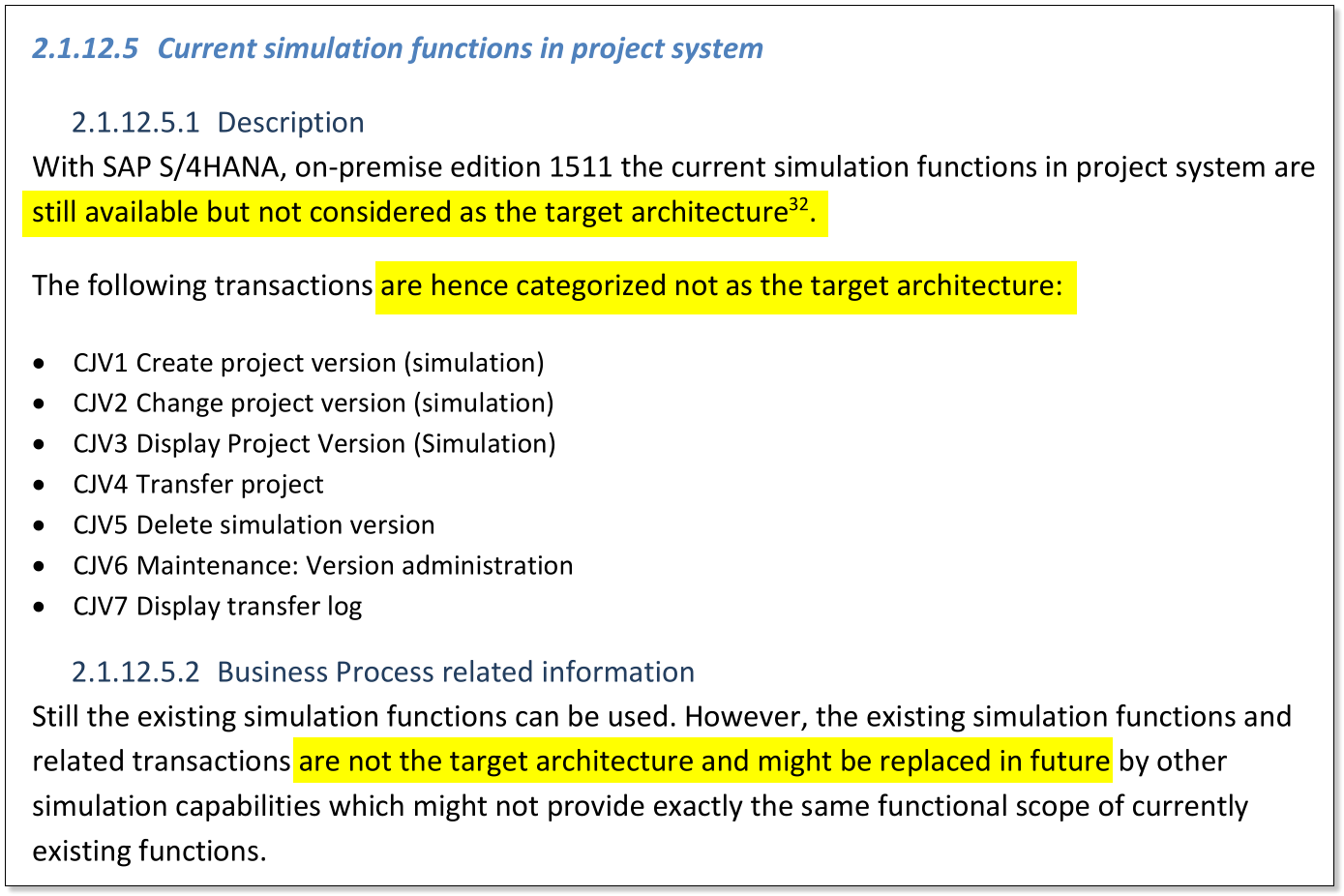 What does this mean?  SAP is clearly giving a heads-up to SAP customers (and partners like Serio Consulting) that the features mentioned in the simplification list are being evaluated but are still delivered, and most importantly, still supported.  Reading into this a bit more and relying on SAP’s history when it comes to developing new functionalities that replace existing ones, it’s clear that they are working on new solutions that will replace those listed in the document. In the example above for project simulation, I read it that SAP is evaluating the simulation functionality and looking at replacing it with something else.  Simulation has been a long standing solution in PS and provides some beneficial and easy to implement functionality.  It has (should) it’s place as part of every well designed PS reporting strategy even if a customer has a heavy BI solution for project reporting.  But, it’s quite old and is basically an aggregator of historical data on a project.  Anytime you define a solution as ‘reporting storage’ or ‘aggregate’, you know SAP is zeroing in on that as a piece of legacy technology that HANA can replace.

Moving on… what else is in the simplification list?  The biggest item that catches my eye is in the reporting area.  Again, this is obvious for any area as we move forward with S/4HANA… reporting is probably the first thing to be replaced as SAP works its way down the ECC-to-S/4HANA roadmap.  That said, it’s shocking and a bit uncomfortable to see the following items listed as “not target architecture”:

The list of reports that are listed spans 4 pages and, to my cursory review, covers every PS report that a user could execute as well as the tcodes used to configure and administer them.  It’s not a comfortable read.

Do you rely on the line item reports such as CJI3N and CJI5?  Not target architecture.

Do you frequently execute CJEN to ensure your PS reports are accurate?  Not target architecture.

Have you spent time coordinating with your accounting users to properly define value categories that are meaningful and ensure that they are defined consistently using CJVC?  Not target architecture.

Do you frequently execute the structure reports (both old and new) as part of project support?  Not.  Target.  Architecture.

This begs an obvious question: What will SAP deliver to replace them?

What I would love to see is a new report painter so we can singularly work with all PS reports using a more modern tool.  I’ll admit, that’s wishful thinking on my part and is not likely to happen.

What I fear is that SAP will continue their Fiori build-out for PS and replace all of these with Fiori apps.  Fiori has it’s place in the SAP ecosystem and as part of a customer’s frontend strategy particularly for casual and mobile use cases.  But I find that Fiori is currently not as stable as SAPGUI, not as feature rich, and not as integrated to other modules.  Their focus on a particular topic using fact sheets can work against it when you are trying to solve a problem.  Consider… If I have to Alt+Tab between a PS report in a Fiori app and a SAPGUI S/4HANA session where I’m investigating the project structure at CJ20N or a PO causing a commitment issue… that’s not a workflow that works for me.  If I’m working with S/4HANA data, I want to be directly in the S/4HANA system running a report or transaction.  Currently, the best place for all of that is still in SAPGUI, not in Fiori.  If SAP continues enhancing Fiori for all other PS related activities, then maybe it will be more integrated and useful.

My other concern with it is that I don’t find a lot of customers using Fiori yet.  There are cases in S/4HANA where you must use Fiori.  The bank account maintenance is only delivered in Fiori and there isn’t a transaction code you can use in SAPGUI that will work.  In general, both for the new S/4HANA greenfield projects and upgrades from ‘legacy’ ECC 6.0, I don’t see our customers rushing to it.  They seem content to use SAPGUI and don’t want to roll out a new frontend tool with the requisite training and change management that comes along with it.  If anything, I’ve seen a few customers slowly dip their toes into the Fiori pool but it’s more of a exploratory move and not a definitive decision to switch to it.  But if SAP takes away our beloved CJI3 report and I have to use Fiori… well, that’s a game changer.  I’d move over, deal with the initial learning curve and, most likely, start migrating my workflow over to Fiori.  I’m eager to see what SAP pushes out.

What else is ‘not target architecture’?

The other items in the simplification list that catch my eye are listed below.  Again, these are items that SAP still supports but have communicated that they will eventually no longer be delivered or supported: